I have a busy schedule tomorrow, but this is such a good story I didn’t want to wait, so today I will be treating you all to a special Thursday edition of Good News Friday. 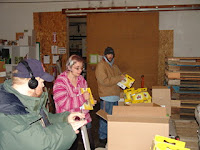 We have a new business partner for the supported employment arm of Imagine!’s CORE/Labor Source department. Twisted Pine Brewing Company, located in Boulder, has recently begun using a Labor Source work crew. The work crew’s tasks are relatively simple. The crew puts four cartons for six packs into larger case boxes and then fills the six pack cartons with a variety of Twisted Pine beers to create variety packs for sale.
The tasks may be relatively simple, but the results are profound. When companies like Twisted Pine hire individuals with developmental disabilities, they are offering them the opportunity to develop vital job skills and become active participants in their communities. The folks they hire take home paychecks, pay taxes, and spend their hard earned dollars in the community. If that isn’t a great definition of community inclusion, then I don’t know what is.
The good folks at Twisted Pine have demonstrated their commitment to providing supported employment to those with significant needs even further by carving out a special position for Gerald. For those of you who don’t know him, Gerald lives in the Bob and Judy Charles SmartHome in Boulder. Gerald has significant physical disabilities, including limited mobility and a limited ability to communicate vocally. Over the past few years, however, Gerald has used an assistive communication device called a DynaVox to improve his ability to communicate his needs and desires. He has also used the device to begin to learn how to read and write – at the age of 48!

Twisted Pine is collaborating with Gerald, Labor Source, and the staff members at the SmartHome to create some tasks that Gerald can perform at Twisted Pine using his DynaVox, including assisting with inventory and even making posts on the Twisted Pine Facebook page! Gerald has already shown his willingness to be a dedicated employee – he has studied feverishly to get up to speed on his numbers and counting using the DynaVox.
Thanks to Twisted Pine for demonstrating their commitment to their community and the individuals Imagine! serves. Congratulations to Gerald and the other members of the Twisted Pine work crew for demonstrating their true capabilities.
Posted by Mark at 12:58 PM