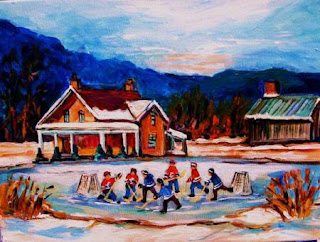 Growing up in the Northeast Kingdom, I naturally gravitated toward playing winter sports, especially
hockey. I have very fond memories of lacing up my skates and sliding across the uneven surfaces of frozen ponds, spending hours with my friends trying to shoot the puck through makeshift goals.
Although we did our best in those games to divide players so that the talent levels were even, it seemed as though every once in a while one team would end up completely dominating the other team. When you were on the team on the wrong side of that equation, often the best strategy was to stay back, focus on defense, and just wait for that right moment when the opportunity arose to suddenly surge forward on offense for a quick breakout play. Ideally, that breakout play would result in a score. The key to a successful breakout play was being prepared, and in the right position, when the opportunity arose.
Now, I know that very few of my blog readers read this blog in order to enjoy my waxing nostalgic about a carefree youth spent on the ice. Fear not. There is a point to my recollections.
For the past two and one half years, those of us in the DD field in Colorado have been playing our own form of defense against a seemingly superior opponent. Budget cuts and system changes have pushed us back further and further, and we’ve spent an inordinate amount of our time desperately maneuvering just to protect our services and organizations. We’ve made difficult decisions, like cutting back or eliminating programs, laying off employees, and pinching pennies wherever possible. We’ve been forced into a defensive stance, and have not had the opportunity to give much thought or preparation on how to break out when the opportunity presented itself.
I happen to believe that now is the time for a breakout play. The economic crisis that precipitated some, but by no means all, of our defensive posturing seems to be improving. Colorado’s new Governor Hickenlooper seems to be genuinely interested in creating a government that is essential, more efficient, effective, and elegant – including the way in which services for individuals with developmental disabilities are funded and delivered. The rink has opened up, and the time is now for us to move forward with the puck.
The question is – are we currently prepared and in the right position to make the breakout play? If the answer is no, then we need to reposition ourselves immediately. We can’t be comfortable staying where we are, or patting ourselves on the back just because we survived a few rounds of budget cuts with a few bruises and minimal scarring. As the Great One, Wayne Gretzky, stated, “A good hockey player plays where the puck is. A great hockey player plays where the puck is going to be.” We need to be able to anticipate where the opportunities for us will be, and make sure we are there ahead of them.
To be clear, I’m not suggesting that we fundamentally change who we are and what we do. Our mission and goal of providing opportunities for genuine community integration for those we serve should remain first and foremost. In hockey, the ultimate objective is to put the puck in the opponent’s net. That doesn’t change. What does change, and what makes playing a sport like hockey such a joy, is the path that the puck takes to get into the net. That is where the creativity, skill, and anticipation come in.
Likewise, our stated goals for the individuals we serve won’t change. However, the way we get there can, and must, change if we are to take advantage of this opportunity to breakout. Let’s do it now before we are required to play defense again.
Then again, what do I know?
Posted by Mark at 1:59 PM