On Friday, February 10, I had the pleasure of attending a ceremony marking the official name change of Special Transit to Via.

For those who don’t know, Via is a local organization that acts as our community’s full-spectrum "mobility manager." Via provides accessible on-demand transportation, individual and group travel training, and mobility options counseling (information and referral) for older adults, people with disabilities, low-income individuals and others living with mobility options.

They do great work, but that’s not what I’m writing about today.

Instead, I’m writing to commend them for one of the reasons behind the name change. As you can see in the video below from the name change ceremony, Via Executive Director Lenna Kottke says that one of the motivations for the name change was that the word “special” is “no longer an appealing or acceptable word for many people living with disabilities.”

Via Launch from Patti Micklin on Vimeo.

What qualifies someone as “special?” There are people we serve at Imagine! who are fantastic artists, far more talented than me. So who’s special in that scenario? Is it the artists because they have great talent and skill. Or is it me, because I have an art disability (namely, I’m a terrible artist). If we follow the logic that leads to the use of “special” in the context of the individuals we serve at Imagine!, I think it would be me that is “special.”

None of this is to put down in any way people who work in the field of so-called special education or the good people at Special Olympics. Instead, it is to draw attention to the fact that we might be better off moving away from describing those we serve as “special” and doing our best to treat people as people, all of whom have their own unique set of strengths and weaknesses. At best, I don’t think the “special” distinction helps anyone, and at worst, it reinforces stereotypes that so many of us have spent our lives working to discredit.

I have commented more than once on what I see as the great potential of Social Media for helping orgnaizations in the human services field become more efficient.

Initially, we at Imagine! looked at Social Media as great tools for better engaging our stakeholders – to keep them informed and to initiate conversations. We are also starting to see that, if creatively applied, Social Media can even help deliver services that improve the lives of some of our most vulnerable citizens.

Here’s a great example of that in action.

Zach Maple, a Behavior Therapist working for Imagine!’s Behavioral Health Services department, recently completed a case study entitled “Differential Reinforcement of Alternative Behavior from Caregiver Attention in the Social Networking Website Facebook®.” That’s a fancy way of saying that the study looked at how Facebook could be used as a tool to lessen the frequency of inappropriate attention seeking behavior.

The subject of this study was a 26-year-old individual with a diagnosis of acquired brain injury. The subject was a frequent Facebook user, and often used Facebook as a platform for making attention seeking, inappropriate posts such as threats of self harm, solicitation of sex, and inappropriate false reporting of caregivers.

The difference that the actions of the confederates had on the behavior of the subject was astounding. Note that the graph below shows how the number of appropriate posts (the red line) rose dramatically during the study period, while the number of inappropriate, attention seeking posts (the blue line) grew at a much slower rate, and in fact seemed to have reached a plateau by the end of the study period. This change in the level of appropriate versus inappropriate posts continued even when the confederates were not responding to any posts during the time frame labeled “Tx II” below.

It is not hard to imagine that this reduction in inappropriate attention seeking behavior on Facebook could have parallels in the world outside of cyberspace. Much of what we do at Imagine! involves providing the individuals we serve with the skills and tools they need in order to engage in their communities successfully. Learning that communicating inappropriately will not be the best way to receive attention online is certainly a lesson that could be applied to an individual’s behavior offline as well. This study also shows that a few people providing an appropriate response to an appropriate behavior can make a difference.

Many thanks to Zach for developing and implementing this creative, impactful, and potentially far-reaching study. Thanks also Zach’s supervisor, Dr. Jeff Kupfer, for supporting and assisting Zach on this study. 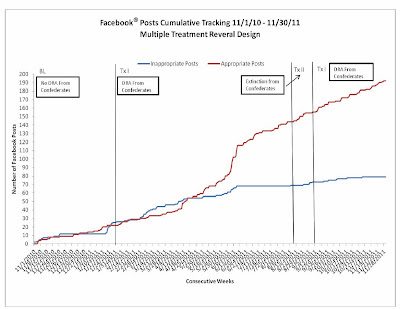 Click on the graph to get a better view.
Posted by Mark at 8:00 AM 2 comments:

Participants in Imagine!’s Out & About program are getting ready to put on their annual Centre Stage performance, and you are invited to attend! 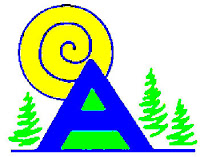 Here’s the details: Every Thursday night for the last three months, class participants have had the opportunity to learn the basics of theater. Each activity focused on integral aspects of theater production, including acting, singing, dancing, choreography, set and costume design, and lighting. Throughout this class, participants worked together to create a stage production.
The program is being facilitated by Oliver Gerland, Associate Professor/Director of Graduate Studies Department of Theatre and Dance at the University of Colorado. Oliver teaches theatre classes including Drama and Disability.
The performance, titled “CJ’s Karaoke Café,” is scheduled for Friday, February 24 at the Broomfield Auditorium, and it will begin at 7:30pm. It’s free to attend!
If you want to check out a video of last year’s Centre Stage performance, click here.

Congrats to Out & About staff members and participants. I’m looking forward to the performance. I hope to see you on the 24th!
Posted by Mark at 9:41 AM No comments:

Oh, no! Not these two again!

This is a time of unprecedented change for services and supports to people with intellectual and developmental disabilities.

That is why I encourage all my readers to attend the Annual Imagine! Community Forum, scheduled for Tuesday, February 28, from 5:45-6:45 PM, at Imagine!’s John M. Taylor Conference Center, 1665 Coal Creek Dr., Lafayette, CO.

If you have questions, concerns, or ideas about Imagine!, or the future of supports and services in Colorado, then please join us!

Representatives from Imagine!’s staff and Board of Directors will be on hand to answer questions and receive input from families and local community members.

Topics to be discussed include:

And this year, you can participate in person or online!

To email your questions/comments in advance or during the forum, click here.

Or just leave your question/comment in the comments section below.

The event was held at the Plaza Hotel Conference Center in Longmont. More than 200 silent and live auction items were available, parents of a child who had received services spoke, and more than 400 people attended. Click here to see pictures from the event.

A highlight of the evening was the debut of a video that tells two stories that demonstrate the impact Imagine!’s work has on the lives of those we serve, as well as their families. You might even recognize one of the people interviewed in the video. (Hint – it is me.)

But don’t let that scare you off – it is still really enjoyable to watch.

Thanks to all who attended and to all the employees and volunteers who helped make the evening such a success!
Posted by Mark at 8:00 AM 1 comment: