On July 11, during an employee softball game, Imagine! Nurse Case Manager Jamie Zimenoff stepped up to the plate in more ways than one.

A player from another field rushed over to his dugout and asked for help, as someone had collapsed from a heart attack. Jamie immediately jogged over to the scene.

Another nurse who was playing on a different field also got word of the situation and ran over as well. She was performing chest compressions as Jamie arrived. A third helper was also present, and the three of them took turns with compressions and breaths.

“I didn’t know this was a heart attack. I just knew he didn’t have a pulse and he wasn’t breathing,” said Jamie.

After a few sets of CPR, the gentleman still had no pulse. An automatic external defibrillator (AED) arrived, and after putting on the pads, the machine advised to give a shock. Still no pulse. Two police officers arrived after the first shock and decided to let Jamie and his team continue their work. “The officer told me afterward that it was clear we knew what we were doing and he wanted us to keep doing our thing,” said Jamie. 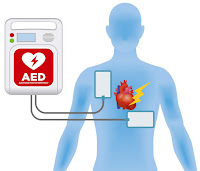 After two more sets of compressions and breaths, the AED advised a second shock, and shortly after that was given, the gentleman’s legs, arms, and head started to move slightly, and he sighed. As he started to come to, the EMTs arrived and relieved Jamie and his partners of their CPR duties.

As the Fire Department EMTs took over and treated the gentleman with an oxygen mask, an ambulance drove onto the field and pulled up to the pitcher’s mound. He was taken to the hospital and treated immediately.

“Honestly,” said Jamie, “I don’t think he would have made it without the AED.” Giving two shocks and almost a third, the AED jump started the gentleman’s heart when he had no pulse.

About a month later, on August 15, Jamie and the other nurse, Carla, had a chance to meet the gentleman, Jerry, at the ballfields. Jerry was cheering on his team from the sidelines, still recovering from broken ribs. When the three met, Jerry immediately opened his arms and hugged Jamie and Carla, expressing his gratitude. Jerry had a chance to ask Jamie and Carla questions about the night of the incident and learn exactly how things went down. Jamie and Carla were both fascinated at Jerry’s recovery time and how great he’s doing.

Jamie, Carla, and the third helper were the MVPs of the night, and everyone at the fields made sure they knew it. Receiving hugs and heartfelt sentiments, Jamie walked away feeling supported after a very emotional evening. We thank Jamie for his heroic actions, rushing to the scene and effectively using his skills when someone’s life was on the line.

And congrats to Jerry for a successful recovery, it’s good to see you back on your feet!
Posted by Imagine! at 7:30 AM No comments: 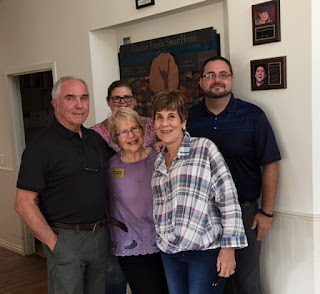 Recent “tourists” at our Charles Family SmartHome in Longmont: Ron McLean from Kentucky, Anne Gates from Evergreen and new Imagine! employee Shanna Mitchell.
Posted by Imagine! at 7:30 AM No comments:

The Longmont Community Foundation is looking to encourage the community to support great local nonprofits on September 12th – Longmont Live and Give Day.

Imagine! is again participating, and I encourage you to help us support our climbing program which allows individuals with intellectual and developmental disabilities to experience the joy and self-esteem that rock climbing can bring.

Watch the video below to learn more, and by the way - you don’t have to wait until Sept. 12 to donate – you can do it right now! 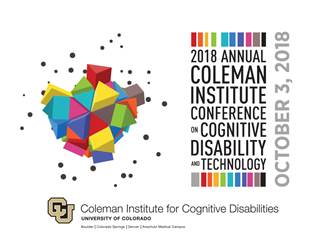 The Coleman Institute's 18th Annual Conference on Cognitive Disability and Technology, “Advancing Accessibility for All” will be held October 3, 2018 at the Omni Interlocken Hotel in Broomfield, CO – and representatives from Imagine! will be there to present on Imaginect.

Jennifer Sheehy, Deputy Assistant Secretary of the Office of Disability Employment Policy (ODEP) and John L. Martin, the Director of the Ohio Department of Developmental Disabilities will serve as this year’s Coleman Conference keynote speakers.

In addition, a variety of both local and national speakers addressing issues related to people with cognitive disabilities and their access to technology will present their work and research, including Imagine! CEO Mark Emery and PR Director Fred Hobbs, who will be presenting on Imaginect.

Imagine!’s service delivery is very labor intensive. The unemployment rate in Boulder County is at historically low levels, making finding qualified workers challenging. In addition, many in our growing elderly population desire personal supports that are similar to the personal supports for those with I/DD. This means that for the foreseeable future Imagine! will be facing increased competition for services coupled with a shrinking workforce available to provide those services.

In short – we’re short workers and need to find more.

To address this critical need, we have reimagined how (and who) we recruit to fill these positions by developing an app called “Imaginect,” which takes an Uber style approach to employee recruiting, engaging a team of on-demand employees pulled from typically underutilized labor pools such as college students or retirees.

In addition to our Imaginect presentation, attendees at the conference will be informed about “The Rights of People with Cognitive Disabilities to Technology and Information Access,” a statement of principles informally known as “The Declaration,” and currently endorsed by over 250 leading disability organizations across the nation will be presented and attendees will have an opportunity to join this national movement that works to ensure full inclusion of people with cognitive disabilities in our technology driven world.

This conference is the only venue of its kind sharing contemporary knowledge of promising practices in cognitive disability and technology innovations and cultivating relationships between public and private entities.

Click here for more details or to register.
Posted by Imagine! at 7:30 AM No comments:

Today I’d like to thank Imagine! CORE/Labor Source business partner InClover for helping us to create a world of opportunity for all abilities. The video shows how this partnership is mutually beneficial and a win for Imagine!, InClover, and especially the people we serve.

Last month, I learned that state of Ohio became the first state in our nation to establish an official “Technology First” initiative, with a goal that “citizens with developmental disabilities be afforded the opportunity to improve their lives through supportive technology.”

I applaud Ohio for this forward thinking, but I can’t help but wonder … why wasn’t Colorado the first state to do so?

The environment in our state is so perfect for reimagining how we can use technology to deliver services to our fellow citizens with intellectual and developmental disabilities (I/DD).

Colorado is also home to Families at the Forefront of Technology, a “community where individuals, families, and providers come together to advance and enable technology for people with special needs.”

And I feel very justified in adding Imagine! and the work we do to the list of reasons why Colorado should have been the logical choice for Colorado to be the first state to adopt a technology first approach to I/DD services. In the past two decades, we’ve:

I could easily list more. And yet, Colorado has so far failed to officially recognize the idea that technology offers some of the best solutions and opportunities for ensuring our friends and neighbors with I/DD can continue to be active, contributing members of their communities.

Now, I don’t believe that if you’re not first, you’re last …

... so I hold out hope that Colorado, and our entire nation, will follow Ohio’s lead.

Then again, what do I know?
Posted by Imagine! at 3:04 PM No comments: 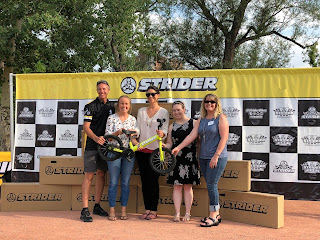 Last month, Imagine!’s Out & About and Dayspring departments received a donation of ten Strider Bikes at the Strider World Cup Championship, held at Boulder’s Central Park. 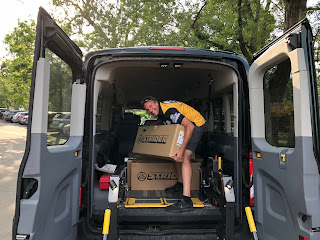 Not only were the Strider folks incredibly generous with their donation, but Strider CEO Ryan McFarland even helped us load the bikes into our van!

Strider bikes are excellent for helping to teach some of the young children we serve who have physical and developmental disabilities to learn to ride, and to experience the joy and freedom that come with it. We are most appreciative to Strider for their continued generous support of Imagine! and our programs.
Posted by Imagine! at 7:30 AM No comments:

While this may seem like a simple undertaking, ensuring that the online application met the myriad of rules, regulations, and requirements for intake in Colorado’s Community Centered Board system meant there were many challenges and roadblocks along the way. But the result will make it easier and less stressful for families and individuals to get started down the path of receiving I/DD services, and that makes the effort so worthwhile. Thanks to all who worked so hard to make this happen! 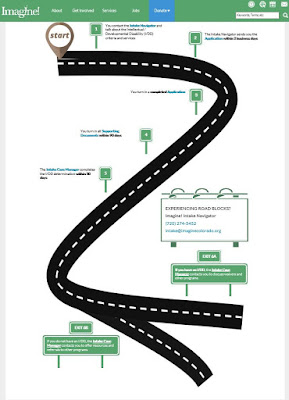 Imagine!’s Out & About department is hosting its Fourth Annual Bike Block Party, sponsored by First National Bank, on August 18th, 11am-3pm, at Erie Community Park. You are invited to join us for what is sure to be a fun and inclusive event.

If you can’t join us but still want to participate, consider sponsoring a rider to help Out & About raise funds to support its efforts to make a positive difference in the lives of people with developmental disabilities and their families by providing positive instruction and community-based services within a therapeutic framework.

Check out the short video below to learn more, and click here to sponsor a rider! 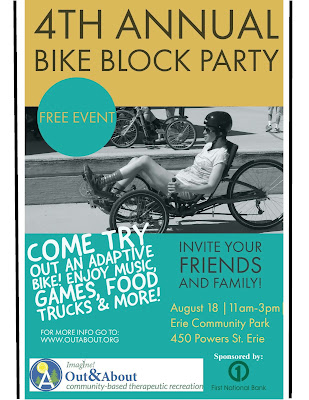