Today I’d like to share a couple of blog posts from the good people at SimplyHome. SimplyHome designs and installs customizable remote support systems that empower independent living for people who are aging or who have disabilities. As such, they have their finger on the pulse of how technology can be used to improve the lives of people with intellectual and developmental disabilities (I/DD), as well as the challenges of implementing these technologies in a system of funding and delivering services that doesn’t always seem to conducive to such efforts.

In the posts, they discuss the term “Technology First” and what it means, and then tackle how to get started down the tech path. They are well worth reading. Check them out below.

Technology First Movement, Part 2: How to Get Started
Posted by Imagine! at 8:58 AM No comments:

It’s no secret that organizations like Imagine! are having a tough time recruiting Direct Support Professionals to help create a world of opportunity for all abilities. I have written about this challenge before.

However, one of the things that inspires me about working for Imagine! is the many ways that we come together as a team when facing challenges, and how we look for unique and creative ways to solve our problems.

One way we’ve been working to alleviate our workforce shortage is through hosting job fairs and open houses, where potential employees are invited to visit our work sites, meet potential co-workers, and take advantage of on-the-spot job interviews.

In the past few months, we’ve hosted several of these events, and the early returns are promising. It won’t solve all of our workforce issues, but it sure helps.

We have several planned for the coming weeks, including job fairs for our Adult Day and Employment Programs, our Residential Program, and for our Summer Camp for children with intellectual and developmental disabilities. Details for these upcoming events are below. Feel free to join us or share the information with someone who might be interested in a career with meaning.

And if you can't make it to one of the fairs, check out our jobs page here. 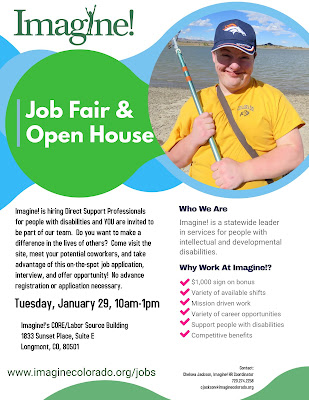 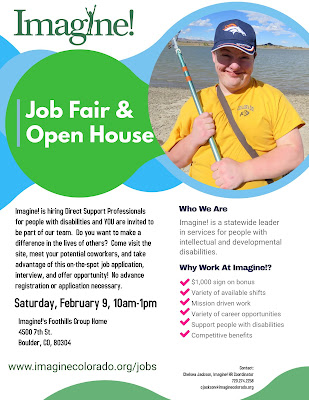 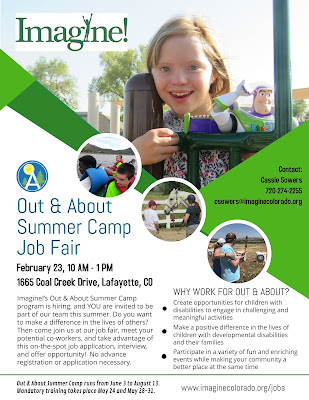 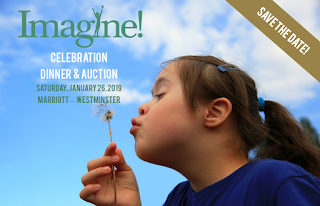 The Imagine! Celebration, set for Saturday, January 26, brings together 500 guests and Imagine!'s mission of creating a world of opportunity for all abilities. Guests enjoy dinner, a silent and live auction, as well as inspirational stories about people with intellectual disabilities in our community. Funds raised support Imagine!'s programs and services for people at every age and stage of their lives. The event starts at 5:30 p.m. with cocktails and silent auction, and the program and dinner begin at 7 p.m.

Here are some links if you want to learn more:

Please support our many generous sponsors.

Get a preview of our live auction.

An event like this takes a tremendous amount of work. I want to thank in advance the Imagine! staff members and volunteers who work so hard to make the night memorable, and to help create a world of opportunity for all abilities.

PS – the event is pretty much sold out, but there may still be a few seats available. If you are still interested in attending and supporting Imagine!’s mission, email Imagine! Foundation Director Patti Micklin.
Posted by Imagine! at 7:30 AM No comments:

Case Closed? I Hope Not 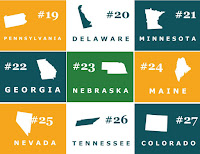 I have been waiting for a while, fearing what the results might be, and my fears have been justified.

The most recent “Case for Inclusion” has been released, and it shows definitively that Colorado is trending in the wrong direction when it comes to delivering services to our fellow citizens with intellectual and developmental disabilities (I/DD).

The "Case for Inclusion," presented in partnership between United Cerebral Palsy and the ANCOR Foundation's Included. Supported. Empowered. Campaign, is a comprehensive data tool that examines how well programs in all 50 states and the District of Columbia are serving residents with I/DD.

There’s more to those numbers. According to the 2015 edition of the Coleman Institute for Cognitive Disabilities’ “The State of the States in Developmental Disabilities,” which tracks nationwide financial and programmatic trends in I/DD services, Colorado ranked 48th in the nation in terms of fiscal effort for I/DD funding. And yet we ranked 6th in outcomes, so we were providing a great ROI through our work. That does not seem to be the case anymore.

And Colorado's fiscal effort, already dismal when compared to other states, has seen spending per $1000 of personal income decline since 2012.

But here’s a surprise: I’m not using this space to gripe about those results. In fact, I see an opportunity in the data above. Colorado has just elected a new Governor, and with that election I see a chance to work with him on changing the narrative above. Wasn’t it Albert Einstein that said, “Insanity is repeating the same thing over and over again, but expecting different results?” I see a chance to NOT repeat some of the mistakes that have been made over the past few years and to explore ways to return Colorado to its former status as a state that consistently delivers great outcomes through its I/DD services, even with limited resources.

To be clear, I’m not saying we don’t need more funding. But there are many opportunities to review and revisit how we were funding and delivering services in ways that have demonstrably worked in the past, but whose efficacy has been undermined by several years of poor and disjointed policy making and oversight.

The Case for Inclusion has been made for Colorado in 2019. It isn’t a good case. But the case isn’t closed, and we can change it to improve the lives of our fellow citizens with I/DD. It will take hard work and a thoughtful process, but the path to get there is right in front of us.

Then again, what do I know?

PS – here’s a great way to view Case for Inclusion results and analysis on a single web page.
Posted by Imagine! at 7:08 AM 1 comment:

They are pictured below along with Imagine! Ambassador extraordinaire Leona Stoecker and Imagine! “Tour Guide” Chris DiRosa. 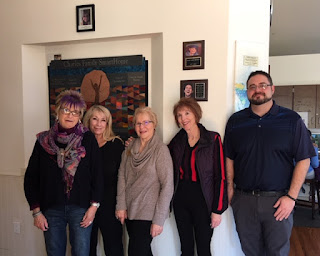 A shout out today to Zach and Dylan for being featured in this year's City of Boulder Parks and Recreation Winter Activity Guide. These gentlemen accept services from Imagine!'s adult day program and volunteered once a week for the City of Boulder this past fall. 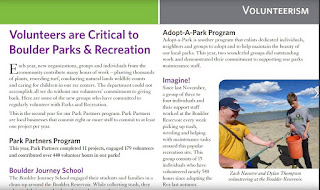 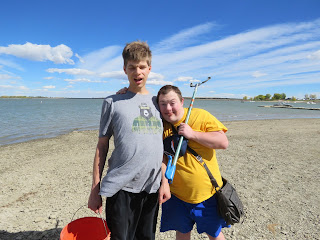 Imagine! has been nominated for Lucky’s Market South Boulder Quarter 1 Bags for Change partnership, and you can help by voting for us!

Here’s how it works: voting runs from January 7th through January 14th. The three organizations with the most votes at the end of the voting period will receive Lucky’s Bags for Change donations for the upcoming quarter.

The vote will exist in the form of a SurveyMonkey survey. Be sure to choose "South Boulder" for the market you frequent when prompted.

Here is the link to vote!

During the voting period, please feel free to share the link above on your social media channels as much as you’d like. Increased visibility and awareness of the post is incredibly helpful in gathering votes, which in turn will help us create a world of opportunity for all abilities. 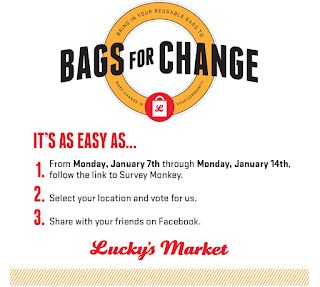 Another Imagine! Holiday Gift Giving Drive is in the books, and yet again I am amazed at the generosity of our community. Check out the short video below to get a “wrap-up” of this very touching example of the season of giving.