Last week we shared some photos of Jessie, who receives services from Imagine!, meeting with University of Colorado College of Engineering and Applied Science students who created a wheelchair canopy to protect her from inclement weather.

Jessie’s Case Manager, LeAnne Woodward, shared some more information with us about the project, and we wanted to share that info with you. Here’s what LeAnne told us:

Two groups of CU engineering students met up with Jessie and myself back in September and said that they were starting a project and would like to design and create a mechanical wheelchair canopy that will serve as protection from the rain and snow. Jessie and I met with both teams and the students asked her what she would like the canopy to do, what color she preferred, how she would like to maneuver it, etc. They took pictures and measurements of her wheelchair and I provided photos of her back-up wheelchair at home.

The first group presented their project to Jessie on Thursday, Dec. 11. 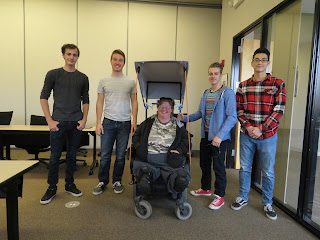 The canopy is motorized and uses two 9-volt batteries. There is a hand lever that makes the top canopy go back and it attaches to the base of Jessie’s electric wheelchair. It is fastened to her chair with straps. It has a grey canopy. It took the students four hours per day for two weeks to complete the project. I asked them what was the best aspect of the project and they said, “The challenge of making it. Seeing the project come to life and helping others.” They said that they enjoyed problem solving. 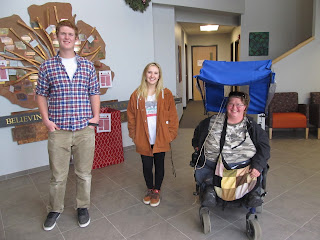 This canopy is manual but it folds back and hangs down from the back of the chair when it is not in use. It is blue with a plastic window and panels on the side to protect from the weather. There is a rope attached to the center of the canopy on the inside that Jessie can pull to bring the canopy forward. It attaches to the handles of the wheelchair.

This group said that they worked on the project for ten hours per day for three months. This included a presentation, an expo and workshops (I’m sure this goes for both groups). They said they had other designs before this one but this design functioned the best. When asked what the best part of the project was, they said, “giving it to Jessie.” Jessie picked the color for this canopy.

Just a side note, when I met up with Jessie and the students she was absolutely beaming in excitement and said that she wanted to drive home with the canopy attached. It was a pretty cool moment for her and the students. I’m glad I was able to be a part of it. Jessie says that she likes it much better than having a flag on her wheelchair. Jessie feels lucky to get the canopy right as the winter season is starting.

Thanks LeAnne for that detailed account of the project, and thanks Conor, Toby, Shane, Dylan, Clair, William, Alana, and especially professor Melinda Piket-May, who taught the class and supported the students throughout the semester.
Posted by Mark at 8:49 AM