Today’s “Technology Tuesday” is both an offering of gratitude and a celebration.

At last week’s meeting of the Imagine! Foundation’s Board of Directors, the assembled Board celebrated the fact that the mortgage for Imagine!’s Bob and Judy Charles SmartHome had been paid in full!

Imagine! began planning for this home in the early 2000s. The strategy was to create a home that demonstrated how a variety of technologies could be used to increase self-reliance among individuals with intellectual and developmental disabilities (I/DD), and to act as a living laboratory for testing and refining new technologies and to promote the use of those technologies for service for people with I/DD across Imagine!, our state, our nation, and even internationally.

This was the first such home in the nation, and the Imagine! Foundation Board of Directors committed itself to ensuring that the home was paid for entirely through donations and grants. An ambitious fundraising campaign was launched in 2005, and now, a little more than a decade later, that promise from the Board to fully support the project has come to fruition, and the home is completely paid off.

The promise of the SmartHome is being realized as well. Early studies demonstrated that the use of technology at the Bob and Judy Charles SmartHome resulted in a large increase in residents’ perception of their control over their own lives and positive increases among residents including: feeling safer in their new home, feeling respected by others around them, number of personal relationships, and access to resources the residents felt they needed.

Though the home was proven to be a successful first step in bringing technology to the forefront of services for people with I/DD, it was only the first step in Imagine!'s strategy. In addition to building a second SmartHome in Longmont, the Charles Family SmartHome, Imagine! has also continually moved forward with the second phase of the project – acting as “tech evangelists” for our field. Thousands of individuals have toured both of Imagine!’s SmartHomes to see first-hand how technology is changing the lives of people with a variety of disabilities. Imagine! staff members have presented on the SmartHomes and technology use across the country. We are constantly embracing new opportunities to demonstrate technology use and the possibilities it has for creating a world of opportunity for all abilities.

None of this would have been possible without the generous support and commitment of the many individual donors, corporate donors, grant organizations, and government entities that provided the funding for the creation of our first SmartHome.

We thank you all for your demonstrated belief in the potential of all. 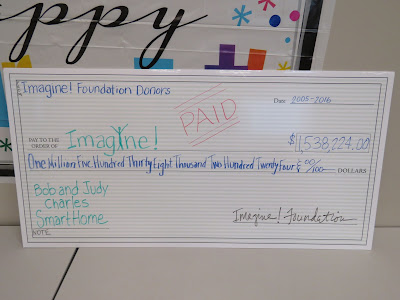