Last month, Imagine! was notified that the U.S. Department of Housing and Urban Development (HUD) announced $2.54 million to fund housing for very low-income persons with disabilities here in Colorado.

Even more exciting, Imagine! will receive $633,700 of those funds to build a home in east Broomfield for six people who have developmental disabilities as well as the more complex issues that come with aging. This is a need that will continue to grow as the “Silver Tsunami” gets bigger and more and more individuals with developmental disabilities will find themselves facing elder care concerns as well. HUD will also provide Imagine! $68,100 to pay for maintenance and upkeep of the home for three years.

You can read an article about the grant from a recent edition of the “Broomfield Enterprise” by clicking here.

We are so grateful for HUD’s support in helping Imagine! meet a need that is becoming more urgent by the day. I also want to personally thank the many local and national community leaders who wrote letters of support for us during the application process, including: 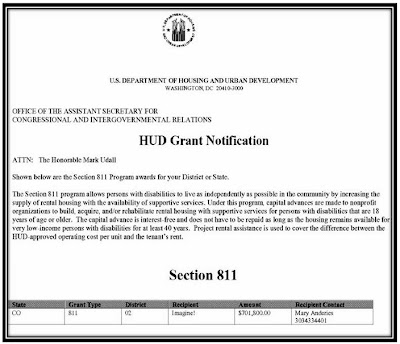