This week’s installment of “50 Years, 50 Stories” comes from Dr. Oliver Gerland, Director of Graduate Studies at the University of Colorado’s Department of Theater and Dance.  For the past couple of years, Oliver has taken time out of his busy schedule to facilitate Out & About’s Centre Stage program. Below, Dr. Gerland shares how the participants in Centre Stage create all aspects of their own theater production. Very enjoyable reading.

Thanks for sharing, Oliver!


Centre Stage From Start To Finish
By Oliver Gerland

My association with Imagine! goes back awhile. When my daughter was younger, she received services through Imagine!’s Out & About program, and we were very pleased with the services and with our daughter’s experience.

So when an email came through my inbox a couple of years ago from the chair of my department saying that Imagine!’s Out & About program was looking for someone to head up its “Centre Stage” classes for adults with developmental disabilities, I jumped at the opportunity.

Centre Stage works this way: class participants get the opportunity to learn the basics of theater. Each activity focuses on integral aspects of theater production, including acting, singing, dancing, choreography, set and costume design, and lighting. Throughout this class, participants work together to create a stage production. At the end of the class, the group performs its show before a live audience.

I try to incorporate a great deal of improvisation and imagination exercises during early classes to help inspire creativity and enthusiasm for the creation of the show. I don’t come to the beginning of classes with any sort of plan; instead, I asked everyone, “What would you like to do?”

For example, here’s how the 2012 production came about. In an early class, I did an exercise where I asked each participant to pretend he or she had a piece of clay, and asked them to do whatever they wanted with the pretend clay. One participant turned the “clay” into pizza dough, and began rolling it and tossing it. His actions and movements were so real and so vivid, it seemed like he really did have a roll of pizza dough. So we decided that the play would be set in a pizza joint.

Once the setting was in place, other participants chimed in about what they would like to do during the performance. Several wanted to sing and dance, so eventually the participants came up with the idea of the pizza joint having a voice-activated computerized jukebox named "Lindsay" for karaoke performers, and named the restaurant “C.J.’s Karaoke Café.”

At that point, we had enough of a framework for me to draft an outline of the play. I didn’t provide a script with the outline, however. Instead, I would set the scene for the participants and ask them what they thought they would say in that particular situation, and then let them improvise the lines. Eventually, those improvised lines turned into a finished script.

With the script in place, participants began working on staging and costuming, and before long, the production was ready for live performances. Throughout the process, the participants led the way in bringing to life a play that was authentically theirs. My role was simply to facilitate their creativity. And the creativity was overflowing!

Facilitating the Centre Stage class these past two years has been incredibly rewarding. When I watch the performances coming together, and when I watch the play live, I get the feeling that I am participating in joy in action. And as a theater lover, I can honestly say that the Centre Stage performances provide some of the best theater of the year in our community. It isn’t just the participants who have a blast. Audience members have a great time as well, and the energy during the performances is palpable.

Sadly, increased duties at CU have meant that I won’t be able to lead the Centre Stage classes this year. But I will hold those memories forever, and hope to be back soon!

Below are pictures from the 2012 performance of “C.J.’s Karaoke Café.” 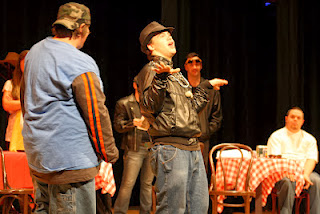 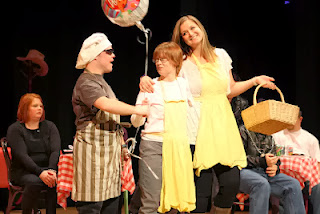 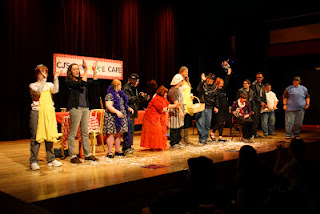